The refuge in the Dolomites

The refuge Tierser Alpl is situated on the saddle of the same name, a place where all paths seem to cross. On the way from the Schlern to the Lang- and Plattkofel, from the Seiser Alm to the Rosengarten, you’ll always pass this spot where Max Aichner, a mountain guide from Tiers, realized his idea of building his own refuge 50 years ago.

Over the years, the refuge has been adapted to the needs of the times, but its spirit has remained the same. The refuge has become a place where people meet, seek shelter from the forces of nature or simply enjoy a good meal and a fine drop of wine. 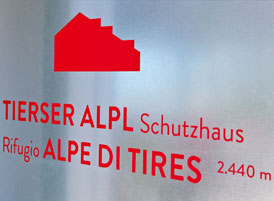 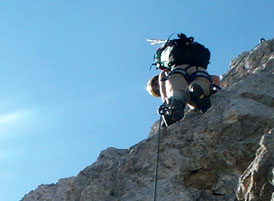 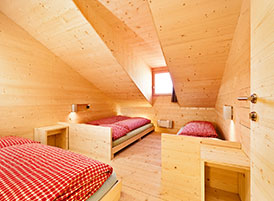 Even if the refuge nowadays offers all the conveniences of modern life, including electric lighting, heating and showers, life still is slightly different at nearly 2500 meters above sea level. A little slower and calmer than down in the valley. Whether this has to do with a certain lack of oxygen up here, or rather with the fact that the most unpleasant of our contemporaries never get so far up – we’ll leave that up to you to decide.

You can only experience it once you’ve been there.


The History of our Refuge

The history of the Tierser Alpl Alpine Refuge begins in the 1950s and the post-war period, as well as in the love of a young man for his homeland and the Herculean task he undertook.

At the end of World War II, the builder of the Alpine Refuge, Max Aichner of Tiers/Tires, stood, like many, before two choices: Either he could continue tightening his belt or he could emigrate. But Max was set against leaving his homeland, and just couldn't imagine living away from his beloved mountains. And so, he seized upon the idea of his brother Franz to build an Alpine refuge serving as an emergency shelter below the „Walrus Tusks".

It was early-August of 1957. Max Aichner, armed with his dream, a wooden wheelbarrow, a shovel and a pickaxe, climbed up through the Tschamin Valley to the „Walrus Tusks", where he intended to build a shelter on the 200 square meters of land which he had purchased from the town of Tiers/Tires.
At an altitude of 2.440 meters above sea-level, completely exposed to the untamed elements of wind and weather, he began his lonely work. He continued his labors until the year 1963, when the Alpine refuge was inaugurated. A few years later, in 1969, he opened up the „Maximilian-Climbing Trail" . In 1986, he opened up the „Laurenzi-Climbing Trail" (dedicated to his wife Laura). 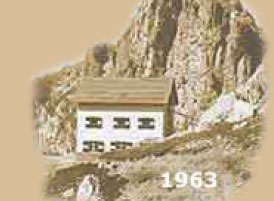 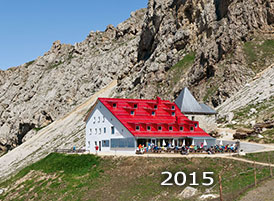 For almost thirty years, Aichner's second daughter, Judith, and her husband, Stefan, have been continuing the work of her father, bringing with them youthful enthusiasm and energy.